Today, as you know, was Martin Luther King Jr. day. I decided we should definitely incorporate the significance of this day into our lesson plans. After arriving back home from a dentist appointment, we had some breakfast and dove right in. We were first to watch the “I Have A Dream Speech.” I got it all pulled up on the television, and my 10 year old son noticed the time bar at the bottom. “It’s 17 minutes long??” He was less than thrilled, which made his 7 year old sister roll her eyes and sigh. I pushed play, and told them we should watch at least the first minute or two before we fast forward to the I have a dream ending. (This was already turning into a disaster, and NOT going according to plan).

About two minutes into it, I glance over at my kids, and they are wide eyed staring at the t.v. They are completely engrossed in the speech! Before I knew it, we were at the I have a dream part, and my son says, “Wow! That was 17 minutes? It went so fast!” I was then bombarded with several questions from them both about what lead up to this speech, why were they treated different, and who cares about skin color anyway? We ended up watching a documentary, and two other mini clips, that provided us with more information. We 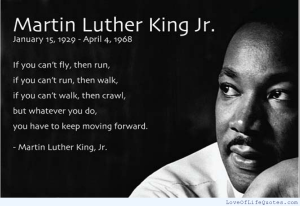 The most touching moment for me, was when my two children were discussing with each other about how they couldn’t understand why people hated others based on the color of their skin. My daughter said to my son, “What if people hated us, just because we are white?” To which my son said, “Well that wouldn’t be fair. Just like it wasn’t fair to hate just because they were black.” My daughter sat staring at her worksheet for a while (they had to make their own dreams for change), and then she said, “Well, I would have let Rosa Parks sit up front next to me.” I got teary eyed, and just smiled. I really had no words, as I was so impressed with how they both grasped the lesson today, at their young ages. We ended up spending a little over two hours discussing it all today. I learned, too. I realized children are the most innocent, most perceptive, most big hearted of humans. Children do not see in black and white, they see humans for humans. Something that even the most educated of people tend to let go to the wayside.

4 thoughts on “Martin Luther King Jr. And My Children”

Read My Past Posts

There’s no rhyme or reason to what I write. I write what I feel, write about what I see, and write about anything and everything. Writing is good for the soul. ~asewalson

Posts By The Month!

Learn to make your own luck.

Simplicity in food and travel

A blog full of tips, inspiration and freebies!

Thoughts on my life... by Donald B. Wilson

get outdoors; find inspiration; discover yourself

Inspirational Quotes To Motivate Your Life

Writing it out, one blog at a time.

Philosophy is all about being curious, asking basic questions. And it can be fun!

A trip through life with fingers crossed and eternal optimism.

As Our Parents Age

Timely Topics on Aging for Adult Children & Everyone Else

Welcome to the adventure, from the fun to the mundane and all that's in-between

When in doubt, sit down and write.

reading and writing the Rust Belt

Life, love and alienation along the way...

Snippets of a Traveling Mind

Bringing the best of artful design to worthwhile online content.

My life as a poet/daydreamer/INFP Free Spirit

The Art of Blogging

A Site For Short-Stories

Breaking news and thoughtless commentary on the world.

Understanding ourselves and the world we live in.

“What you are is God’s gift to you, what you become is your gift to God” Hans Urs von Balthasar